Ōmi is the region that occupies the space between the major cities of Kyōto and Nagoya. A large part of Ōmi is water – the huge Lake Biwa, Japan’s biggest lake, which is easily mistaken for the sea. From the eastern shore of Lake Biwa extends a broad plain, ideal for growing rice and raising livestock. At the centre of Ōmi sits Hikone, a highly strategic castle town. One of Japan’s main highways from ancient times, the Nakasendō, passes through the region, with a waystation at Maibara. Many places of Shintō worship existed here from the nation’s earliest recorded history, and it later became a centre of Buddhist culture. Today, in addition to its traditional agriculture and fisheries, Ōmi is home to global high-tech businesses. Hikone is one of the few places in Japan where you can still experience the atmosphere of a regional castle town with its various quarters and traditional businesses, making it a mecca for anyone who really wants to understand Japan.

For most of Japan’s early history, Kyōto was the home of the Emperor and the political and administrative centre of Japan. But at the end of the Heian period, the emerging military class was usurping the power of the Emperor, and warlords from the regions around Kyōto vied to be appointed regents. Meanwhile the Buddhist centres of Mt. Hiei and Ōmi had developed their own formidable military and economic power, and they too sought to exert influence on the capital. As the Heian period ended and the Warring States period began, monk warriors from Ōmi fought with other regional powers for dominance. The chaos was finally ended by a succession of three Shoguns from Nagoya who gradually subdued the other warlords and united Japan as a single nation.
During this time, the Shoguns attacked and burned many of the Buddhist temples of Ōmi in an effort to break their power. As they consolidated their hold over Japan, it became clear that there would be a final showdown between the powers to the west and east of Ōmi. This showdown came at the Battle of Sekigahara, a few miles northeast of Hikone. The epic battle is one of Japan’s most significant historic events, which resulted in the capital being moved to today’s Tōkyō, marking the start of the long Edo period.
From Nagahama in Ōmi came one of the two major players at Sekigahara. Based in Sawayama Castle in Hikone, Ishida Mitsunari contended against Tokugawa Ieyasu for control of all of Japan. Mitsunari was a man with a vision of an equitable, virtuous society. He was a skilled administrator and warrior, but in his zeal, he sometimes caused great offense. By contrast, Ieyasu wanted to establish a stable dictatorship, and he was a suave and skilled negotiator, as well as a brilliant tactician. When battle was joined on a miserable wet day in the fields of Sekigahara, Mitsunari had the larger force and looked set to win. But Ieyasu had suborned some of Mitsunari’s captains with promises of rewards if they defected or took no part in the fighting, and many did so. Mitsunari was defeated, captured, and executed, and Ieyasu divided up the country, rewarding his supporters with new, larger domains.
One of Ieyasu’s captains was Ii Naomasa, lord of Hikone, who despised Mitsunari. Naomasa was a fearsome warrior whose samurai wore bright red armour in battle to inspire terror in their opponents. At Sekigahara, Naomasa’s forces were the first to join battle, a signal honour which they took for themselves due to their ferocious enthusiasm. Towards the end of the fight, Naomasa was injured by a stray musket ball, which probably caused his early death at 41. 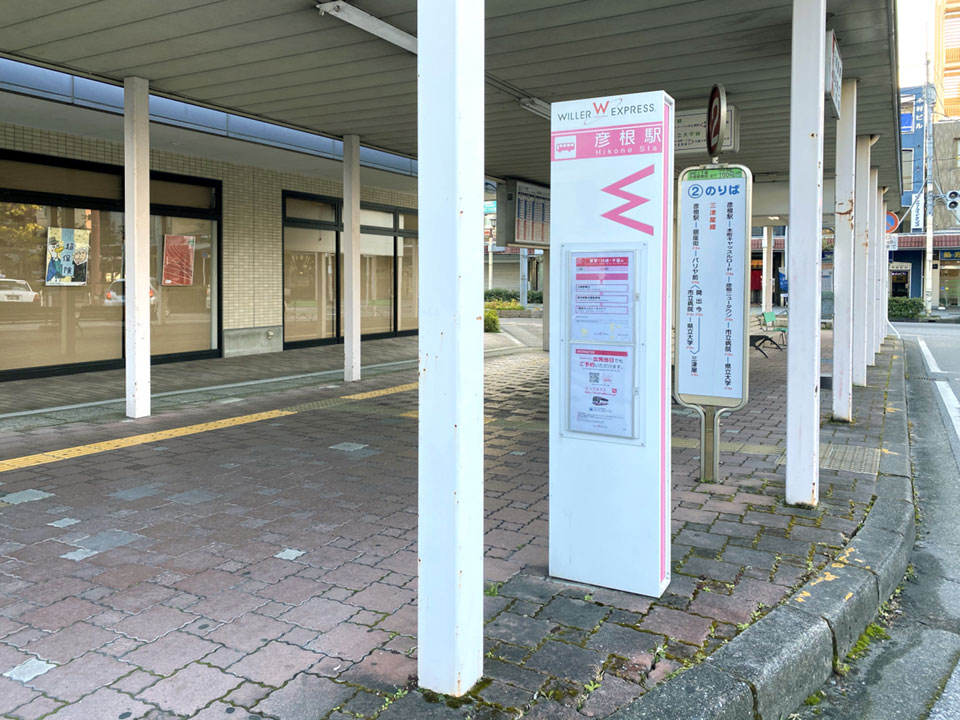 Ōmi is located between Kyōto and Nagoya. The nearest international airports are Kansai and Chūbu Centrair.

The Meishin and Hokuriku Expressways offer access by car.

There’s a night bus from Tōkyō Station and Tōkyō Disneyland to Hikone, arriving at the West Exit of Hikone Station.

From Airport by Train 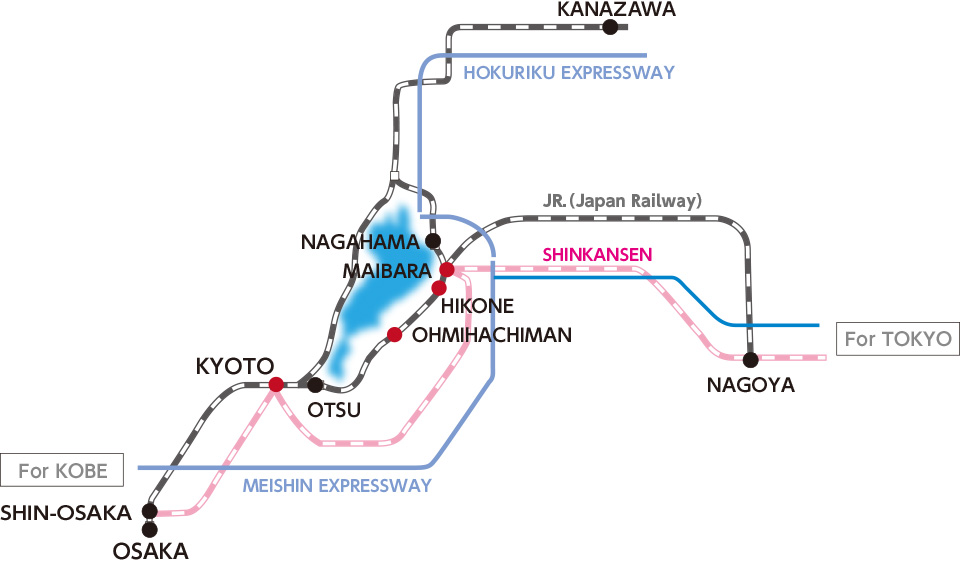 From Airport by Car

We recommend visiting the Tourist Information Centre in the plaza in front of Hikone Station at the West Exit. 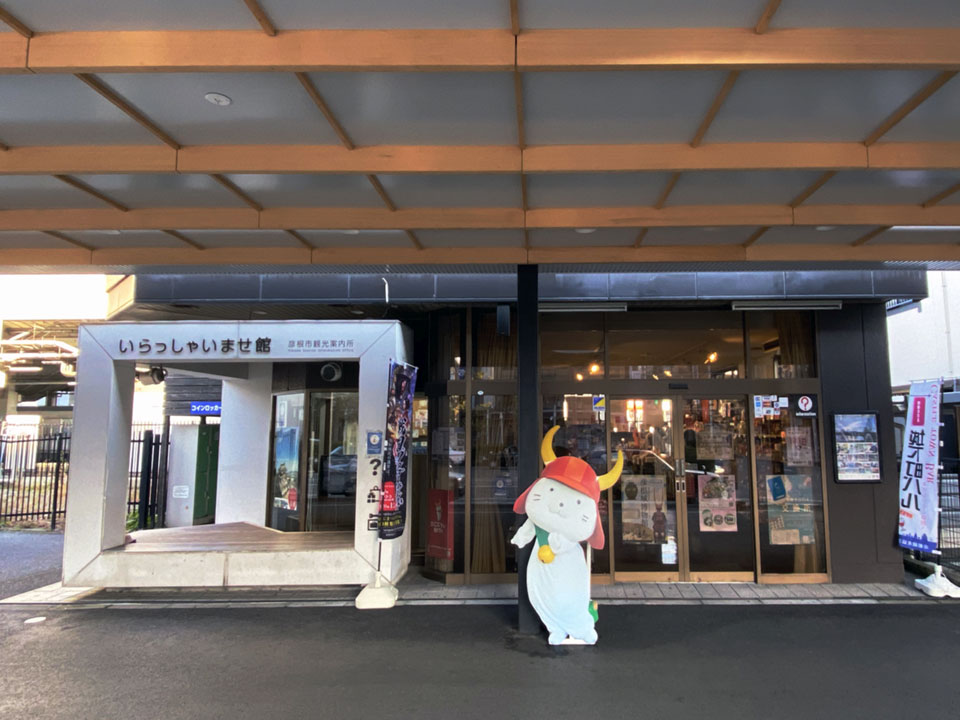 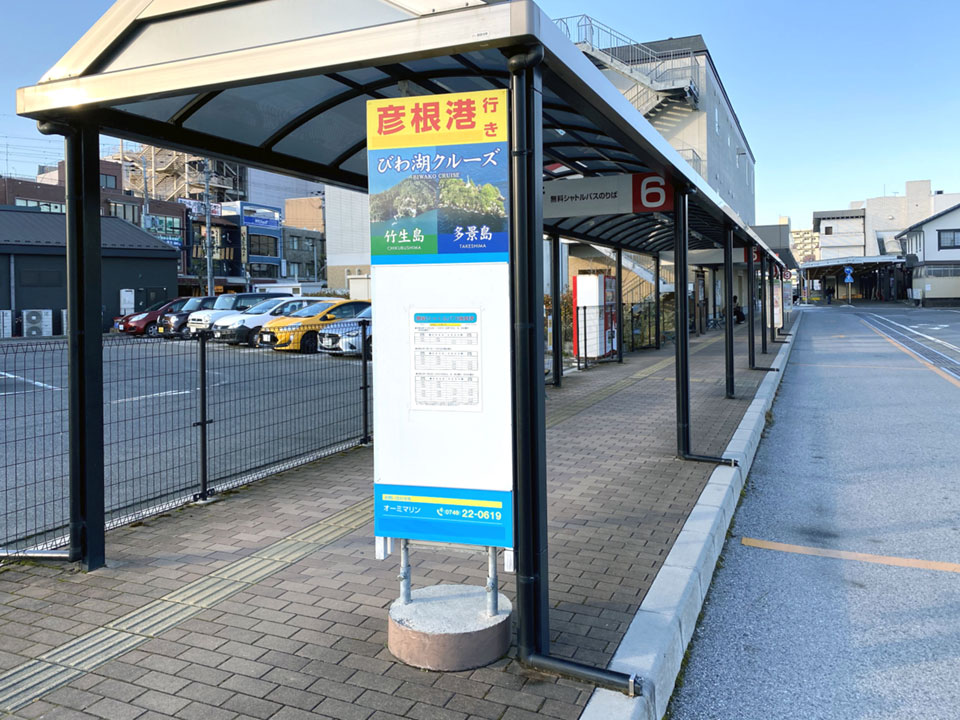 You can walk to Hikone Castle or take a taxi from the West Exit of Hikone Station. JR and Ohmi Railway lines are a convenient way to travel between the towns of Ōmi. To get to Chikubu Island in Lake Biwa, there’s a free shuttle bus from the plaza in front of Hikone Station to Hikone Port.

You can hire bicycles at several places showing the Megurinko “Rental bicycle for ecology trip” sign. There’s a shop near the West Exit of Hikone Station.

You may notice that while this site refers to Ōmi, the name of our organisation is Ohmi Tourism Board. Ohmi is an older spelling, and we’re gradually updating our brand to reflect the more standard Ōmi.
Japanese has both short and long vowel sounds, and if you use a short vowel sound when you should use a long one, it can change the meaning of the word completely. If it’s a place name and you say it incorrectly, you probably won’t be understood. So it’s important to indicate the pronunciation clearly for people who aren’t familiar with the Japanese language and how to say Japanese words. There are various ways of showing how to pronounce ‘Omi’ properly with a long o. ‘Ohmi’ is one. ‘Oumi’ is another. And ‘Ōmi’ is yet another.
When the Ohmi Tourism Board was established, there was an idea that it would be cute to link the name to “Oh my!” as an expression of the sort of surprised pleasure that visitors to the region experience. And so it was decided to add an h to indicate the long vowel sound. But using an h can be confusing in some situations, so for Ohmi’s English website, it was decided to show all of the long vowels with a bar over the top. So we have Ōmi, Kyōto, and Ōsaka.
Thank you for your understanding, and good luck with your Japanese pronunciation. Remember, practice makes perfect!