Salon Bar Thistle, on the ground floor of Hotel Sunroute Hikone, is a cigar and cocktail bar with a distinctly old-school character. From the low lighting to the comfortable armchair stools, the bow-tied barmen and the backlit bottles, it proclaims its commitment to an authentic cocktail experience.

The bar is run by Miyashita Jun, who is generally known as a history buff. This is reflected in a selection of historically themed cocktail offerings. I confess to being sceptical of the merits of combining history and alcoholic beverages, so it was with a doubting mind that I first visited the bar.

Attired in a black suit and bowtie, Miyashita-san welcomes me with a warm smile and invites me to sit at the counter. Although Thistle offers drinks from all over the world, including a formidable range of Scotch whiskies, Miyashita-san has developed some drinks that are unique to Ōmi, with ingredients or stories from the region.

First up is a highball made with Dewar’s whisky infused with Mandokoro tea from Eigen-ji in Higashiomi. The type of tea used is hōjicha, where the tea is roasted, imparting a dark, toasty flavour. It goes by the name of Ōmi Ancient Highball, since the tea has been cultivated since the Muromachi period. The highball is very refreshing and thirst quenching, as might be expected from a combination of a soda-based cocktail and a cup of tea. It certainly has a unique and one might say, regional taste. As an extra touch of regionality, the drink is served on a coaster made from Ōmi jōfu woven textile, one of the three nationally registered crafts of Shiga. This original cocktail can also be enjoyed at Hana-shōya, a Japanese fusion restaurant, and Futabasō ryokan.

After a little back and forth about the history of highballs, which Dewar’s claim to have started, it’s time for something different. The menu offers a variety of cocktails named after historical characters from the region. The latest in the line-up is Akechi Mitsuhide, an enigmatic personage famous for his rebellion against Oda Nobunaga and subsequent sacking of Azuchi Castle in Ōmi.
“I come from Tagachō and there are claims that Mitsuhide was from there too. The cocktail is based on genshu sake from Taga, with kumquat liqueur and blue curacao reflecting the blue bellflower crest of Mitsuhide.”
Miyashita-san gets a-shaking. The drink comes in a glass engraved with the flower crest, and the subtle combination of the sake and citrusy kumquat is as enigmatic as its namesake.

Other cocktails based on historical characters are Ii Naotora and her son Naomasa. These cocktails are sweet and dry respectively, using the liqueur of the medicinal plant honeysuckle that Tokugawa Ieyasu liked to drink. It imparts a delicious quincy flavour and the deep red colour of the Ii clan’s armour.
“Is this liqueur also made in Ōmi?”
“No it’s from Hamamatsu. I use products from many places, but since the Ii family were retainers of the Tokugawa, there is a link.”
Naomasa comes in a glass decorated with the golden horns of its namesake’s helmet, pressed from lemon peel with a cutter specially made for Thistle.

“What sort of person do you think Ishida Mitsunari was?”
“In Hikone today, it’s all about the Ii clan. After all, Mitsunari was on the losing side of history. In the Edo period, he was really an un-person. But a few years ago there was a project to rehabilitate him and I decided to make a cocktail in his honour. And when I started studying up on him, I became interested in history. The more I learned, the more I realised that he was a very upright, direct person, and I wanted to reflect that in my cocktail.”
“It’s interesting that the local governments tend to favour the winners of history while the public have a soft spot for the losing side.”
“That’s true. Even in the Edo period though, Mitsunari had his fans. At Ryōtan-ji Temple where the Ii clan are buried, honours were also paid to Mitsunari in secret”.

I ask Miyashita-san how long the bar has been running.
“Fourteen years now.”
“And in those fourteen years, has Hikone changed much?”
“The biggest thing was the emergence of Hikonyan, the mascot character of Hikone. Hikonyan has brought a lot of attention to the area.”

Maybe some time in the future, bartenders in Hikone will be mixing up delicious, historical Hikonyan cocktails to commemorate his coming. 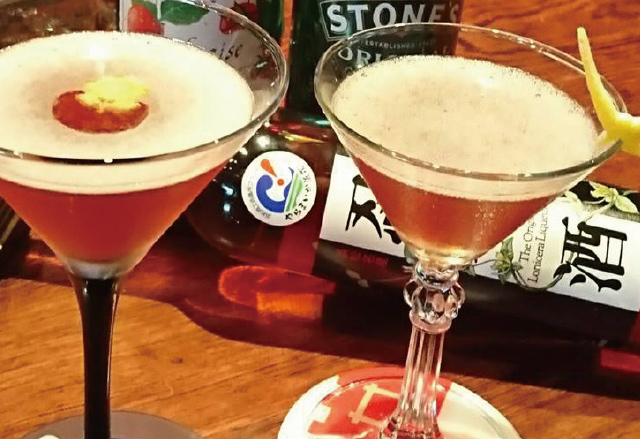