Funazushi is a delicious culinary specialty of the Ōmi region. Said to be the progenitor of today’s sushi, it’s freshwater fish preserved by salting, followed by fermentation with rice. Funazushi is a kind of narezushi that was made since ancient times. It was developed as a means of preserving the nigorobuna (round crucian carp) from Lake Biwa for consumption throughout the year. There are various ways of writing funazushi in Japanese.

Funazushi is made by local commercial producers, whose products are generally of a mild character. But many families in Ōmi make it at home according to methods handed down for generations. Some families favour a stronger taste and aroma, which can be achieved by adjusting the ratios of ingredients and the storage times. In the Edo period when rice vinegar was invented, the laborious production of narezushi gave way to the faster preparation of sushi using fresh fish and vinegared rice, which became very popular. But with the ready availability of funa in Lake Biwa, funazushi has remained popular in Ōmi to this day.

The history of funazushi

The recorded history of funazushi dates back to the Nara period (around 700). According to the Engishiki, a record of laws and customs completed in 927 in the Heian period, funazushi made with rice and salt was offered to the court as tribute from today’s Maibara. During the Edo period, funazushi was made in Ōmi Province using funa caught in both spring and autumn. But since the autumn funa wasn’t subject to the high temperature of summer, its fermentation was inadequate, and its production was gradually abandoned. Today, funazushi is made using spring funa. Since the Edo period, nigorobuna has been considered optimal, but gengorobuna is also used. Both species are endemic to Lake Biwa. Both male and female fish are used, but females with eggs are considered more desirable and fetch higher prices.

The typical manufacturing method currently used in Ōmi is as follows;
The scales, gills and intestines of funa caught in spring are removed, leaving only the ovaries. Rather than cutting open the belly, the internal organs are pulled out through the mouth using a metal hook. Then the abdominal cavity of the fish is filled with salt and the fish are laid in layers with salt in a tub, with a final covering of salt. A lid with a smaller diameter than the top of the tub is placed directly on the salt, and a large stone or other heavy weight is placed on the lid. The tubs are then left in a cool, dark place.

After salting until midsummer, the funa is taken out and rinsed with water. The salt is largely removed leaving only enough to provide a slightly salty taste. Then the funa is stuffed with cooked rice. Salt may be added to the rice if a saltier final product is desired. Sake may be added to promote fermentation. The funa is arranged in the tubs in the same manner as for salting, but with cooked rice instead of salt. A weight is placed on the lid and the tubs are kept in a cool, dark place as before. For lactic acid fermentation, it’s important to exclude air, and to achieve this, the space at the top of the tub above the lid is filled with water. Another method is to put a large plastic bag in the tub and arrange the funa and rice inside it. The mouth of the bag is then sealed, and the lid and weight are placed on top, effectively excluding air.

If the funa is packed in rice during the summer, it can be eaten in late autumn. It can also be left to ferment for two or three years. Lactic acid fermentation prevents the fish from decaying and promotes the increase of umami components such as amino acids. It should be noted that while lactic acid is often associated with milk, no milk products are used in the production of funazushi.

After fermentation in rice, the funa can also be further flavoured by being packed in sake lees or miso.

There are various ways of eating funazushi, such as eating the whole fish as it is, cutting it into thin slices, or serving slices on a bowl of rice with green tea. The orange-coloured mass of eggs has a cheese-like aroma and texture. The skin of the funa is rather hard and chewy, but chewing it releases a lot of amino-rich flavour. Fermentation softens the bones so that they’re no longer detectable. Funazushi is typically packaged with a quantity of the fermented rice, and this can be enjoyed placed atop the slices of fish, or separately as a snack.

Funazushi is the perfect accompaniment to sake, especially richer, stronger tasting varieties such as yamahai and kimoto. It goes particularly well with warmed sake. Try pairing it with a range of Ōmi’s high-quality sake brands.

The fermented rice is also used for making ice cream. This may seem counterintuitive and even downright disgusting, but the ice cream has no hint of fishiness. Instead, the amino acid imparts a rich creaminess, combined with an agreeable tanginess reminiscent of good cheesecake. The soft grains of rice give the ice cream a toothsome texture.

The aroma of funazushi

Funazushi has a unique fermentation odour that arises from the breakdown of fish protein into amino acids, which are flavoursome umami components. However, funazushi that is fermented skillfully doesn’t smell very strong. After being packed in rice, it may be repacked in sake lees, which suppresses the odour of fermentation.

Funazushi is known to its adherents as an aromatic food and to its detractors as smelly. So what does it actually smell like? The short answer is, it has a pleasantly cheesy, fishy smell when it’s ready to eat. The long answer is provided by Kasahara Kayako of the Department of Biochemistry, Okayama University Medical School in her paper Volatile Flavor Components of Funazushi. The abstract states;

When the funazushi is being salted, there’s an aroma suggestive of ammonia, although we haven’t performed a headspace analysis of it. The smell may just be a combination of all those carbonyls and esters.

The rising price of funazushi

The production of funazushi is laborious, time-consuming, and requires skill and practice. Unfortunately, nigorobuna, which is the most suitable type of carp for funazushi, has been adversely affected by a decline in reed beds along the shoreline causing deterioration of water quality, destruction of spawning beds due to concrete shoreline reinforcement, and predation by invasive species such as black bass and blue gill. Declining catches and labour shortages have resulted in the price increase of a single processed fish to several thousand yen in recent years. For this reason, other kinds of funa have been tried as substitutes. Attempts have also been made to make narezushi using the same technique as funazushi, using invasive varieties of fish.

Since funazushi is becoming something of a rare delicacy, the opportunity to try it shouldn’t be missed. Why not enjoy some tasty funazushi with a cup or two of Ōmi sake?

Where to enjoy Funazushi 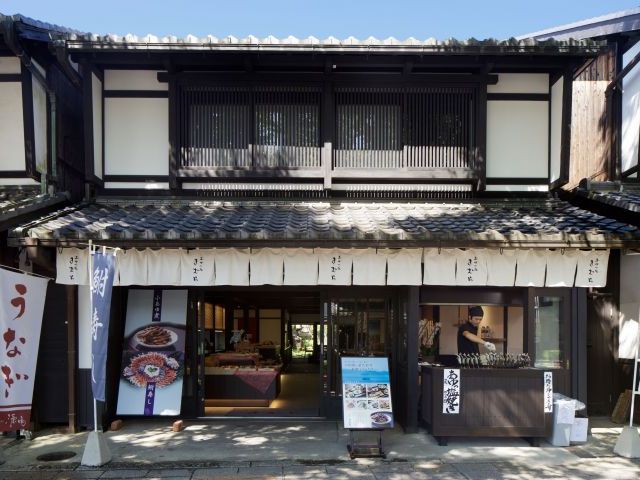