Ōmi is renowned for its black wagyu known as Ōmi beef, and one of the prime purveyors of this delicious meat is Sennaritei Foods, which has a number of restaurants in the area. I had a very meaty day enjoying a beef bowl at the Castle Road Store, visiting the Head Office, and dining at the Shinkabō restaurant in the evening.

Among its other properties, Sennaritei has two restaurants in its building on Castle Road in central Hikone. On the first floor is a butcher’s shop with a cosy little eatery serving simple fare such as beef bowls. You select an item and buy a ticket from the machine, sit at one of the several tables, and a few minutes later your number is called. I ordered the stewed Ōmi beef with onions on rice. The bowl looks small, but it’s a generous, filling portion. Needless to say, the quality of the meat is completely different from the beef bowls served at the big chain restaurants – the beef is fragrant, rich, mild and very tender – a taste of luxury at an eminently reasonable price.

In the afternoon, I visited the Sennaritei Head Office. All the staff were standing at their desks when I entered, and they bowed in unison. I’ve visited many companies in Japan, but I’ve never received such an impressive welcome. CEO Ueda Kenichiro showed me into a boardroom lined with movie posters featuring Japan’s A list. Ōmi has been the location of many notable Japanese and western films. I ask Ueda-san what relationship the posters have to his company.
“When actors and staff are filming, their life can be pretty spartan and the meals they grab between shots are one of their few pleasures. Sennaritei provides hot meals featuring Ōmi beef”.
So it might be said that Ōmi Beef is a source of inspiration for numerous popular movies featuring some major Japanese and international stars.

Ueda-san is the third generation of his family to head the business. There’s a framed illustration of the future vision for Sennaritei showing a cattle farm in Hikone.
“Currently we have a farm in Omihachiman where we produce Ōmi beef, but we want to have a farm here in Hikone and establish a Hikone beef brand starting this year”.

It also shows a Beef Museum. I wonder aloud what sort of exhibits it might have.
“Back in the distant past, the Hikone Domain was the only region of Japan where the slaughter of cattle was permitted. The leather was used for manufacturing weapons and armour. At that time, eating meat was forbidden except for medicinal purposes, so the leftover meat was made into jerky and sold around Japan as medicine, and there are lots of records showing where it was sold. There’s a photo taken by a foreign visitor in the Meiji period showing a shop sign in Kagawa offering Hikone meat. We want to show Ōmi Beef in its historical context”.

Ueda-san showed me around the shop in front of the Head Office. Every cut of finely marbled beef imaginable is displayed like art in the refrigerated cases, but there’s also a lot of pork too, including huge pieces of stewed pork and a variety of sausages. I’m curious to know why the company logo features a gourd.
“A golden gourd topped the battle standard of Toyotomi Hideyoshi who had a castle in Ōmi at Nagahama. Hideyoshi was very active in moving into every region of Japan and we chose the gourd to symbolise our resolve to maintain the same spirit”.
It’s dark outside, and now it’s time to go and eat some more Ōmi Beef, at Shinkabō. Climbing the stairs up from Castle Road brings you into a beautiful, elegant space that promises luxurious eating. An island counter with spotless steel hotplates is offset at one end by a wall of intricate ‘ranma’ wooden screen patterns behind glass.
“This is wonderful. I understand that there are very few craftsmen who can make this sort of thing nowadays.”
“We had this made specially. It was hard to find the craftsmen”, says Ueda-san simply.

The course starts with preserved sweetfish and three kinds of cold pork sausage each flavoured differently. The slice featuring sanshō pepper became an immediate favourite. A smartly attired waitress appears with the wine list several pages long, but I’m keen to try some local sake this time. I opt for a warm flask of Kirakuchō from Higashiomi, which makes a very good companion for the rest of the meal.

Then comes a shabu-shabu hot pot, with a bowl of soymilk atop a brazier and some generous slices of beef. I try dipping the meat for various lengths and conclude that medium rare suits me best. The fat of the beef melts into the soymilk and with the addition of the leeks and mushrooms at the end, produces a superb broth.

Next comes roast beef sushi, a hearty take on Japan’s signature cuisine. It’s topped with a little caramelised onion sauce to complement the rich meat and served with a slice of pickled myōga to cleanse the palate.
The sushi is followed by beef sashimi, a first for me. The meat is pink with fat. It has the familiar taste of meat, but with a texture like firm butter. I’m looking forward to eating it again. However, Ueda-san explains why it’s not found on many menus.
“For the sake of hygiene, the law requires that any beef that will be consumed unheated must be charred on the outside. This is a burdensome procedure and most restaurants aren’t prepared to go to those lengths”.

After the sashimi comes the steak, prepared at the counter by the chef in a tall hat. We’ve probably all seen pictures of ‘the wagyu ceremony’, but I’ll admit to being fascinated by the efficient care that goes into it. It resulted in ten bite-sized pieces of juicy, tender steak with a choice of condiments. The simple salt and pepper was wonderful, but the sweet wasabi transformed the beef into something altogether Japanese. Here the warm sake really shone.

For dessert there was a slice of raspberry cake and a serving of rich azuki ice cream, accompanied by a bowl of matcha tea.

Impressed by the pleasant demeanour of all his staff, I asked Ueda-san how he achieves it. He seems pleased that I ask. “When new staff join, I explain to them what sort of company Sennaritei aims to be. Then I assign them an experienced mentor from within the company. The staff also gain experience working in all of our restaurants and they’re encouraged to take away and share the best practices. We also send our staff to eat at some of the most luxurious places to learn what it means to experience first-class hospitality themselves”.
It seems to be working very nicely.

Cattle were introduced to Japan in ancient times and they were used for thousands of years as plough animals. They were not used for meat except as ‘medicine’ for the elite. Ten varieties of native ca 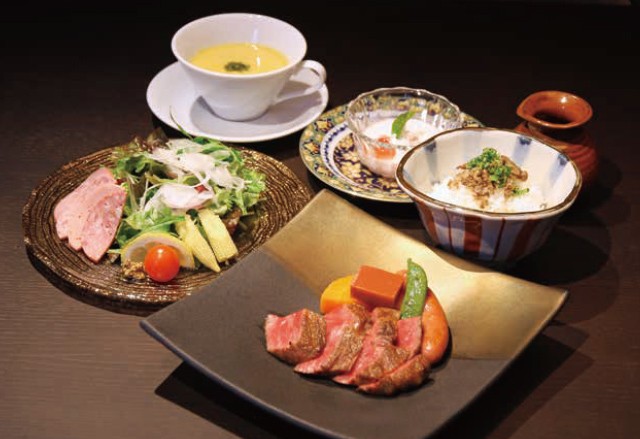