The sweets that sustained Ii Naosuke

Hikone still retains a strong atmosphere of an Edo period castle town – the Edo period castle is still there, the streets are still laid out in the grid characteristic of such towns, and you can still see the traces of the way stations where the feudal lords rested on their way to Edo for regular attendances with the Shogun. Not only that, at Itojū on Castle Road, you can try the sweets that the last lord of Hikone enjoyed so much. I went to meet Fujita Takeshi, President of the company and the seventh generation of the family to run the business. He explained how Itojū developed under the patronage of Ii Naosuke.

Sometime before 1800, a businessman who went by the name of Itoya Jūbē moved to Hikone from the Kohoku area and ran a yarn shop. As a side business, he made rice crackers and other snacks. Records state that his wife learned how to make confectionery from a white-haired old man in a dream, and Jūbē turned to the confectionery business in earnest in 1809.

In 1815, Ii Naosuke was born as the 14th son of the 11th Lord of Hikone, Ii Naonaka. As one of so many sons, Naosuke’s prospects of achieving a place in history were slim. In 1831 when his father died, he moved to the clan’s official residence, where he was constrained to living the frugal life of a student, in a little house he deprecatingly called Umoregi, bog-wood. Naosuke devoted himself to literature, martial arts, tea ceremony, and nō theatre.

It’s recorded that during a tea ceremony, Naosuke gave to Nagano Shuzen, a scholar of Japanese literature who later became his right‐hand man, the confectionery called ekijutō made by Itoya Jūbē. As a mark of gratitude, Shuzen produced a tanka poem that makes a clever, oblique reference to the confection and its maker. “The basic meaning of the poem is ‘Let’s both lead a long life’. After Naosuke went to Edo, his life was marked by many vicissitudes, but while he was still in Hikone, he led an idyllic existence. Naosuke was himself quite the poet.”

This ekijutō is an outwardly simple preparation of mochi and a type of sugar called wasanbon. This is a unique high-grade sugar, said to be one of the world’s three best sugars on a par with maple syrup. It’s used as a high-end ingredient in Japanese confectionery because it has an elegant flavour without being too sweet. Since it melts in the mouth, sweets made of hardened wasanbon alone make a high-quality confectionery.

“Wasanbon is very hard to handle since it readily absorbs water. Like matcha, it changes colour very easily. Wasanbon is normally compressed into a solid form using a decorative mould but combining it with mochi and matcha as we do is quite unusual. We do everything by hand because the ingredients are so delicate. For example we can’t make our products when it’s raining”.
Itojū purchases it from Tokushima Prefecture in Shikoku.
“That’s rather far away. How did that come about?”
“We did a bit of research into that. Ii Naosuke’s daughter was adopted by the Takamatsu Domain where wasanbon is made, and it’s thought that she introduced it to the Hikone Domain. Naosuke was also interested in foreign things, and Itoya Jūbē also tried making confectionary with ingredients from overseas.”

By a strange freak of succession, Naosuke unexpectedly became the thirteenth feudal lord of Hikone in 1850 at the age of thirty-six and was required to journey to Edo for the legally stipulated attendance at the Shogunate. Records show that he stopped at Toriimoto Juku where he was served the ekijutō confectionery care of Jūbē.

Ii Naosuke ultimately became the chief adviser to the Shogun, but he was assassinated in 1860 at the age of forty-six at the gate to Edo Castle. Naosuke once lent Itoya Jūbē a wooden pattern of a willow to make wasanbon confectionery. “Naosuke was very fond of the willow as a symbol. The willow doesn’t break however hard the wind blows, and Naosuke was the object of harsh criticism so perhaps that’s why he associated himself with the willow.”

Moving with the times (like a willow perhaps), Itojū has developed other products, for example umoregi named after Naosuke’s early residence. It’s white bean paste in mochi dusted with wasanbon sugar and matcha. “Most confectioners buy their bean paste from contractors, but we’re unusual in making our own. For our bean paste, we use white navy beans that only grow in Hokkaido. The mesh that we use to strain the bean paste is very fine, resulting in a paste with an exquisite texture.” 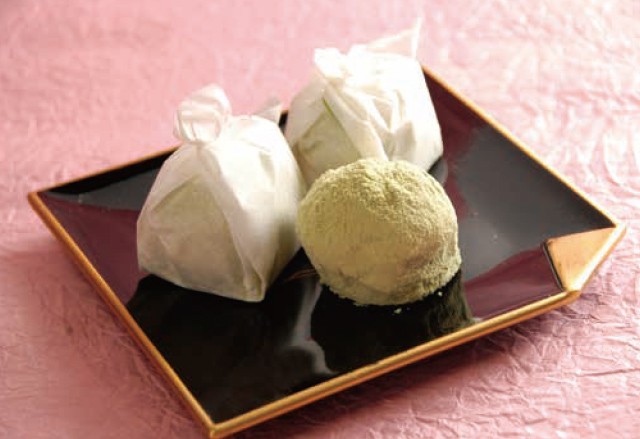