Largely unknown outside of Japan, a butsudan, literally a ‘Buddha stand’, is a miniature temple which the Buddhist faithful can have in their home, in front of which they can perform all of the rituals they would at an actual temple. Until the end of the last century, they were popular items of household furniture, something that everyone who could afford one desired as the focus of their family’s spiritual devotions.

Butsudan are typically large and very elaborate creations. Many are the size of a western wardrobe. Like a wardrobe, they’re made of wood, with doors that open in front. They’re lacquered, usually in black, and decorated with gold-plated fittings and carving coated with gold leaf. The shelves within are laden with numerous diecast appurtenances used in Buddhist ceremony. It’s not coincidental that the techniques and technologies for making butsudan are the same as those used for making Japanese armour.

At the end of the Warring States period, Japan entered the long, peaceful centuries of the Edo period. Warriors stopped whacking each other about, and the regular demand for new suits of armour dried up. The armourers – the lacquerers and platers and die casters – needed something else to do, and butsudan was the answer. That’s why today’s remaining butsudan makers are typically found around castle towns like Hikone.

Inoue Butsudan is one of Hikone’s foremost butsudan shops, located on the street called Nanamagari, which means ‘seven bends’. The street leads to Hikone castle from the Nakasendō, one of Japan’s main thoroughfares since ancient times. But Japanese castle towns were built as an integral part of the castle’s defences, so the street has no less than seven acute bends to make it difficult for attackers to pass. Nanamagari is lined with the workshops of craftsmen who make the various parts that go into a butsudan. And Inoue Shōichi’s business is assembling and selling butsudan. His job is also to figure out where to take the craft at a time when the demand for butsudan is declining just as it did for armour.

I visited Inoue Butsudan to learn more and to have a go at gold-leafing, one of the central crafts of the business. The shop itself is a pristine new building in the Japanese traditional modern style, fitting in perfectly with its older surroundings. Entering through the door facing the street, I find myself in the butsudan accessories department where the candles, incense and brass bells are arrayed. Mrs. Inoue comes out smiling from behind the counter and bows a welcome. Shortly Mr. Inoue appears in his smart work clothes and takes me deeper into the shop to see the butsudan themselves.

They’re truly extraordinary. The deeply lustrous acres of smooth lacquer on the sides contrast with the multiplicitous and intricate gold detail on the inside. The inside of the wardrobe is a simulacrum of a temple with steps, a balustrade, pillars, soffits, gables, and roof. Not forgetting, of course, an image of the Buddha.

“Butsudan differ according to Buddhist sect. Pure Land Buddhism has a standing Amida Nyorai Buddha, whereas Zen will have a seated Shaka Nyorai Buddha. The pillars of the various temples are also different for each sect.”
I notice that the gold inside the doors of two adjacent butsudan is different – the one on the left shows the grain of the wood underneath, whereas on the right, the gold is smooth and lustrous.
“The one on the left is gold powder and this one is gold leaf. To achieve this effect, you apply transparent lacquer to the wood and then brush on the gold powder taking care not to obscure the grain. This is more expensive than gold leaf, which is easier to apply”.

Inoue-san is pleasantly matter of fact about prices and the costs of each process. Every item on sale has a price tag, and not a few of the items are in the millions of yen.

To address the declining popularity of butsudan, Inoue-san is wracking his brains on product development. One of his ideas is display stands for luxury watches. Automatic winders are incorporated into decorative frames that use the techniques of butsudan manufacture. They’re certainly prestigious looking products, but I wonder how well they’re selling.
“Not so well”, says Inoue-san with a wry laugh.
But there’s no need to worry yet. Hikone butsudan are one of three crafts registered as nationally recognized crafts of Shiga Prefecture, and as such, anyone wanting a butsudan is willing to come from far afield to buy one. Inoue-san reels off the prefectures where buyers come from, and it’s pretty broad. And for anyone in Japan who wants an old butsudan restored, Hikone is also the place.

We go upstairs to have some fun with gold leaf. Visitors to Inoue Butsudan can try their hand at applying gold leaf to a copper mould of various animals mounted on a wooden board. The procedure is the same as that used for gold-leafing butsudan. You paint on some adhesive and then remove most of it. Then without breathing or disturbing the air in any way, you pick up the gold leaf with bamboo tongs and lay it on the workpiece.
Careful!
Any abrupt movement will tear the micron-thin metal and the dull copper will show through. But that’s OK because you can fix it by applying some more gold. Then you use a fine brush to push the gold into the detailed parts of the animal – its eyes and claws, and the fiddly little bits where the copper meets the wooden backing. Completing this painstaking process is very satisfying, and the gilded animal is strikingly beautiful.

Inoue Butsudan was founded in 1901 and the current Inoue-san is the fourth generation.
“Did you ever consider another line of work?”
“When I was young, there was so much demand for butsudan that I never thought of anything else.”
“You certainly know how to apply gold leaf. Are you master of all the crafts involved in making a butsudan?”
“All I can do is assemble a butsudan. But there are seven processes involved, and my job is to direct the several craftsmen to meet an order. So I have to understand enough to tell the craftsmen what to aim for. It takes about ten years of solid work to become a qualified craftsman.”

I find it interesting that each butsudan contains a Buddhist temple of its own.
“When you visit an actual temple, do you find yourself considering the quality of the workmanship – this is nicely done … this is poor work?”
“Actually, I get a lot of inspiration from real temples and shrines – the designs of carvings and so on. I often take photos and apply what I’ve learned in our butsudan.”
“Is there somewhere in Ōmi that you’d particularly recommend?”
“Hōgon-ji Temple on Chikubushima Island in Lake Biwa is a National Treasure. The carving there is really impressive. It’s currently undergoing restoration”

As something that’s normally found in a home, butsudan is a rather private aspect of Japanese culture. Butsudan shops aren’t the sort of place that foreign visitors feel free to enter and look around. At Inoue Butsudan, visitors are met with a warm welcome and an invitation to explore this deep and fascinating subject.

Carom is a game that’s been popular in Hikone since the Meiji period. Although children enjoy playing it, the combination of physical coordination and game strategy makes it very engrossing for adults 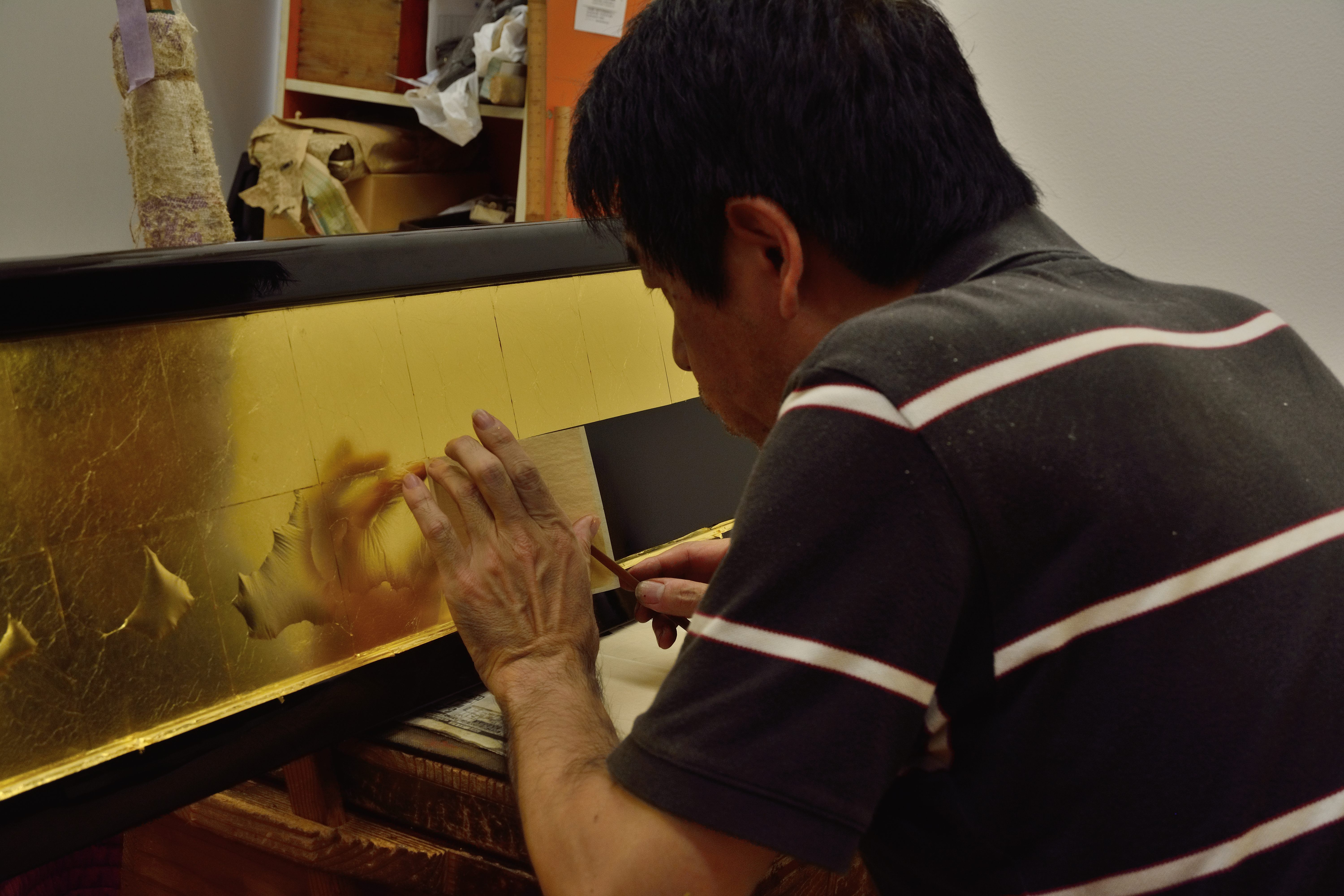